Mel Gaynor, of course you will know him as ‘the best drummer in the world’, as Jim Kerr announces him during the worldwide Simple Minds Tours. Besides the memorable rockscenes with Lou Reed, Tina Turner, Peter Gabriel, Brian May,….Mel Gaynor has so much more in store, by focusing on pure music, with his own creative interpretation of jazz. In Autumn 2017, Mel released his second album ‘Got The Message’ with his Mel Gaynor Fusion Project.

On Friday 22 Sept, The Mel Gaynor Fusion Project was guest on the Verviers Jazz Music Festival(BEL) in La Salle Tremplin Dison. “The evening before, in the Hnita Jazz club, was already a huge success”, said manager Maximiliaan Vandomme.

This evening, we forget Simple Minds and close our eyes to enjoy. Three hours before the gig, our Frontview team had a chat with Mel Gaynor, a few yards away from his life, his drums on stage. During the interview, the auditorium is still empty, but a few hours later, there will be an enthusiastic public, givng a standing ovation. 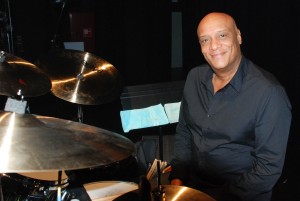 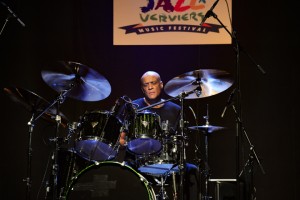 How did the gigs going in Oberhausen(GER) & Heist op den Berg(BEL) yesterday?

The people in Oberhausen were very enthusiastic, a nice place to play, it was good fun. Last night, it was very surprising, the concert was fantastic, very well received. Tonight, we should have a great crowd as well.

When did you first realise, in your career, that jazz was also your passion?

In 2008 we had our first album out, and then it’s been a long time, that we had our second album ‘Got the message’ in 2017. We’ve been trying to tour as much as possible. Next year there will be more dates.

Jazz has always been a passion in my career. Even from the start, I played a lot of jazz, in my early days, before I joined Simple Minds. Jazz & funk was the heritage and the forfather in playing the other type of music.

Jazz, always a kind of improvisation?

You always start of a signature or a theme, then you improvise around that theme, it is wonderful for doing that.

Did you ever had the chance to improvise in rockbands as The Pretenders, Simple Minds ?

In the beginning of Simple Minds, we improvised a lot, before we started to lock in computers or sequencers.

We go on with improvisation. Is it thinkable that you play tonight a litte different session than in the rehearsal room?

Not really, we have themes or tracks that we pre-organized and we improvise around those songs. So today, it is not really improvisation. We do take solo’s, we solo around what’s there already. Perhaps the next album will be more experimental, more improvisation.

Did you consider about having a lead singer in the band ?

Not really. I did think of having maybe a jazz singer , maybe for the next album. As far as this project is concerned, it’s purely instrumental.

Are there influences from other artists, I listened to this album many times and I found in the first seconds of the song ‘Zeta’ a Simple Minds sound.

We’ve always had influences of the Weather Report, the Yellowjackets, Taylor and also upcoming bands as Snarky Puppy. Our ears are open to different kinds of music. And yes, there are themes of Simple Minds in this music! (because I was a in Simple Minds, you know J). In the songs ‘Got the message’ en ‘Chamaleon’ , the derivaty is of Herbie Hancock, we tried to put our version of that track to it and yes a little ‘Level 42’ accent too, as you mentioned before.

I think to try to play this type of music, our brand of jazz to as many people as possible. Next year extensively, to bring this to many people.

Introduce us the band members tonight.

On keyboards & synthesizers Philippe Van Der Niepen, a Belgian born keyboard player. Nicolas Baudino on saxes (who is originally a part of the band on the second album), Philippe Chayed (bass),who is in the band for many years now.

How is the process about choosing an songtitle, there are no lyrics.

With ‘Beyond the stars’ I was thinking of my father, who passed away some years ago. That was written, dedicated to him. He’s still looking down to us. Zeta, it was a kind of hybride of emotions, mixed feelings. ‘Betrayed’, is about betrayed by a woman, and never looking back. There is always a woman in every story. ‘Got the message’, there’s a message from many people, we like to put across the message to many people, “Did you get the message? Did you get the sentiment behind the song?”.

Two songs of Herbie Hancock on the album.

We made update versions of Maiden Voyage & Chameleon.

(Mel mentions his appreciation during the gig: “We love Herbie!”)

Can you say already something about the new project Risk?

The new band is a another step in a different direction of Simple Minds. It’s a 3 piece rock band, featuring myself (drums, vocals), James Ford (guitarist), female bass player Holly Henderson. The band is pretty heavy rock. It’s rock which can be identified with pop. Pop rock on the heavy side. Many Simple Minds fans & rockfans will like it. I’m very proud of the project, it sounds fantastic. There will be gigs in Belgium of course. (starting February 2019), and in Antwerp there are all great jazz clubs to play for the Mel Gaynor Fusion Project.

We can’t avoid it, the Simple Minds questions.

The biggest masterpiece of Simple Minds in history?

Albumwise, it is ‘Once Upon a Time’, iconic & some great songs.

On which albums was your influence the biggest?

Sparkle in the rain, Once upon a time, Real life, a lot of influence on these albums.

How many times did you play Don’t You Forget About Me ?

To many to remember! It’s still a great song, although it wasn’t written by Simple Minds. It makes me smile everytime I play.

2019, Simple Minds will be celebrating 40 years, is there a chance that you will return?

Who knows, who knows……The door is open, but there are also the other projects Risk & The Fusion project, that’s fine for me. If the door opens again, we will see. I’m quite happy doing what I’m doing.

Mel, you are sometimes wearing a kilt on stage, remembering Scotland?

In Scotland, we only recorded in the studio that Simple Minds owned. We didn’t really recorded many times in Scotland. Rather in London, Los Angeles, New York, occasionally in Glasgow.

How did you come to Belgium to live here ?

Many years ago, I came to Belgium. It was great to be here for a while, love the people, now I’m back in London.

We are nearly from the circuit Spa Francorchamps, is there also a passion for cars?

Yes, and we played also at the 24 hours of Francorchamps race, incredible to be there, I was in heaven!

We end with a quotation of Mel:

“I really appreciate everyone who shows interest in me and my passion”. 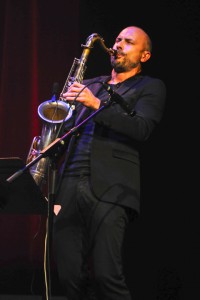