Interview Anaïs Mitchell about new album:  “I didn’t even really realize I was writing an album!”

Mitchell is a Tony® and Grammy®-award-winning creator of the Broadway musical Hadestown for which she wrote the book, music and lyrics. Hadestown won 8 Tony Awards overall including Best Musical as well as the Grammy for Best Musical Theater Album. Mitchell was named to TIME’s prestigious TIME100 list in 2020, and her first book, ‘Working on a Song – The Lyrics of Hadestown’ was published by Penguin/Plume in the same year. 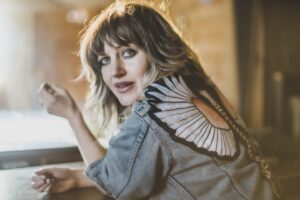 She has headlined worldwide and supported tours for Bon Iver, Josh Ritter and Punch Brothers, and her music has featured in year-end best lists including NPR, Wall Street Journal, MOJO, Uncut, The Guardian, Sunday Times and The Observer.

The self-titled full-length will be available on January 28, 2022 via BMG. Produced by Josh Kaufman, the 10-song album also features core players including Kaufman, Michael Lewis, JT Bates, Thomas Bartlett and Aaron Dessner, with string and flute arrangements provided by Nico Muhly. Dubbed by NPR as “one of the greatest songwriters of her generation,” the Vermont-based Mitchell is a master of the worlds of narrative folk song, poetry and balladry, and the 10 songs on this record are a perfect showcase of her skills. In addition, Mitchell has also shared the album’s stunning first single, “Bright Star.”

After leaving her life in Brooklyn at nine months pregnant and moving back home during the pandemic, the album chronicles Mitchell’s reconnection with the Vermont roots that have been so formative in her life and music. “Bright Star” finds her making peace with the idea of being at peace in the familiar setting of her grandparents’ house.

“During the first pandemic summer I was staying on the family farm where I grew up, in a little  house that belonged to my grandparents when they were alive. I could see the stars for the first  time in a long time,” Mitchell recalled. “I wasn’t traveling anywhere, or even doing much of anything, for the first  time in a long time. ‘Bright Star’ is about looking back on years of restless pursuit and making  peace with the source of that longing: the Muse, the Great Unknown, the One That Got Away — those things that motivate us that we never can touch.”

Anaïs wrote her answers down in an open & honest style for Allkinds. 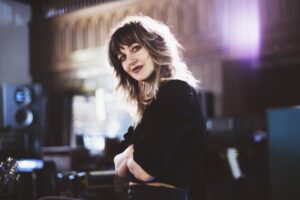 When & how did you get the first idea, inspiration for this album?

“I didn’t even really realize I was writing an album! It’s been an incredibly long time since I wrote and released my own “songwriter” music, mostly because I became so obsessed with my musical Hadestown that I didn’t have the bandwidth to do anything else. It took Hadestown going up on Broadway, and then the pandemic, when I moved from New York City back to my little rural home state of Vermont, to really get in a headspace where I could write my own songs again. I think for the most part I was just enjoying reconnecting with the muse! But when I looked back and realized I had an album’s worth of songs, it also suddenly became clear that I had sort of written an album about growing up. And I’m quite sure that happened because I moved back to the place of my childhood, the source, if you will.”

All the songs seem to be part of one harmonious musical concept.  Is it a spontaneous process or do you think before: ‘all the songs have to sound like that for this album’?

“I think oftentimes people give artists more credit for intentionality than they deserve! I really just got on “a jag” as we say in the States, and a lot of the songs were written in open tunings, open D or open C. I think that sort of very wide-open, flowy kind of chord progression appears a bunch in these songs and gives them a sort of sonic stamp (in addition to producer Josh Kaufman’s very singular sonic stamp).”

What kind of feeling do you have when you’ve created a song/album? How do you experience the creating proces, a kind of translation of the subconscious within us?

“I usually know when a song is done because I have a physiological feeling about it, a feeling in my body. You’re right that songwriting is very mysterious and involves both hemispheres of the brain and also a lot of deeper stuff that we don’t even necessarily consciously understand. For me it’s a meeting of my own heart and mind with something that comes from without and is not of my own making. I oftentimes cry when I’m writing songs. I cry so much writing them that there are no tears left when it comes time to perform them.”

When you’ve a lot of ideas, do you have to make a kind of triage? Is this new idea  for a book, a musical or for a song?

“I’ve only written one musical and one book, and they were both kind of part of the same project which took one third of my life to write! So that feels like a pretty singular event… most of the time a musical idea goes into a song… at least I think that’s the case! Just feeling my way!” 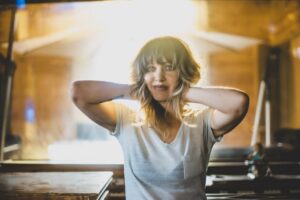 Who’s the critical look behind you, your feedback?

“I have an overactively critical mind that I have to consciously try and trick and keep it looking the other way so the childlike and mysterious part of creation can happen. The conscious mind is such an important partner in the process of writing, but I don’t like it to be in ‘the driver’s seat’.”

What is the most beautiful reaction on your work ?

“I think there’s music that serves all kinds of functions for people, some music makes people want to dance and that’s a wildly important role for it to play. My own music, for whatever reason, I think oftentimes its job is to let people cry. So I find it very beautiful when people have that reaction to it.”

The songs on this album sound perfect, but what’s the funny side of this…. Maybe bloopers in the recording studio in Woodstock?

“We recorded a couple songs that didn’t make it onto the record that you might have found funny!”

The album is selftitled, are these stories your story?

“Yes, the speaker in all the songs is me, the stories are all my own stories. It’s wild to me that I’ve never done this before. I think I shied away from it, I was afraid of coming across as self-important, navel-gazey, not “deep” enough. I often wrote in the voices of other characters, told other stories, in order to gain access to something that felt mythic and larger than life. There’s a way in which suddenly with these songs, it felt I had something to say. I had something in my heart I thought other people could maybe use to hear.”

Did you originally had more songs for this album?

“Yes, I cut a couple of songs that I really loved last minute because they just didn’t sit right in the sequence, but I hope to release them eventually. And there were a couple others that just didn’t seem right for this album (which I will probably not release).”

The song sounds in the beginning very cinematic with the piano. Why did you choose this bridge?

“I love how you can hear all the players alive in the room at the beginning of the track. It felt right to open the album with those sounds because that’s how we made this record: live, in a room. I wrote Brooklyn Bridge as a sort of a love letter to New York City, which I left during the pandemic and was missing very much and having big feelings about.”

As a songwriter, you are always busy with word choices. Should I choose new terms in language use or the known words….How do you make a choice?

“Often I think it takes TIME for a new word to feel welcome in the world of poetry. I find “telephone” very poetic, and I even put “mobile phone” in a song once, but somehow “cell phone” hasn’t yet arrived in the pantheon of poetic words. I love songs that feel, at some level, timeless, so I don’t love words that time-stamp a song.”

A message that there is a big desire to the real world in the past? There were so many positive Twitter reactions….

Was there also the influence of the lockdown during the pandemic on your writing? Less traffic &silence, and we heard the birds singing, the whole family was @home,….

“Absolutely, all of that is true. My experience returning home to Vermont during the pandemic was the closest I’ve come to the “old world / real world” era before the smartphone. I could literally hear the birds singing. I could literally lie in the grass.”

What’s the meaning behind ‘Backroads’?

“Backroads began as a simple nostalgia piece about growing up in a rural place (Vermont). It was about young love, my first boyfriend, it was about going to a party in the woods, drinking beer underage, and the cops show up and kind of give everyone a slap on the wrist. I was partway through writing this song when George Floyd was killed and the Black Lives Matter protests began to re-surge in the States, and it suddenly became so clear that I was writing a song of white privilege. That I was afforded this adolescence where I could feel quite free and even think of myself as “a rebel of some kind” when in fact I was entirely protected by the benevolent adults of my community, including the police, and that that simply isn’t the experience of a lot of Black kids growing up in America. All I could think to do was… to write that into the song.”

‘Now you know’, this song touches so much.  About real things in life?

“Thank you so much. It felt like it was the MOST direct and honest I could possibly be in a song.”

“When I left New York City and Hadestown behind, and found myself with my family in my home state again, it was as if there was a clearing in my heart, in my life, a vista. It was as if I’d been hiking in the woods for years, head down, one foot in front of another, trying to finish Hadestown, be a good mom, etc., and then suddenly I was able to look up and actually see again: a “watershed” in my life. I also wrote this song for a friend of mine whose marriage dissolved during the pandemic. There’s something about the grace that sometimes happens in a moment of loss like that. It’s like, all the love, the tears, all the effort, and now the thing is just… up in smoke… but that doesn’t mean it wasn’t worthwhile. You’re still here and you carry on, and you carry those things in your heart on the path ahead.”

You’re coming to Belgium in November 2022, what do you already know about Belgium? J

“I love Botanique, I’ve opened a few shows there and just adored it! But as for what I know about Belgium… hmm, it’s not a lot. Waffles? Strong espresso? Can’t wait to learn more!”

And what is for you the most beautiful place in Vermont?

“I’ll have to say the farm where I grew up. All my childhood dreams and imaginings are there. It’s quite special to be moving back there!”