“Rohkea rokan syö”, or to loosely translate this Finnish saying: “Fortune Favours The Brave”. Truly, none have been braver than BLIND CHANNEL. Focusing intently on their mission to take their brand of infectiously ferocious numetal outside of Finland’s linguistic restrictions this bravery is engrained within.

Indeed, Finland is a dark place. It’s cold, fiercely loyal to its mother tongue and in the wrong geographical spots it can be unforgiving. A harshness exasperated by darkened evenings    from their northern hemisphere location, yet it doesn’t stop them from ranking number one on the World Happiness Report. It’s a dogged determination that radiates throughout their homeland, and it’s even more stringent in BLIND CHANNEL. 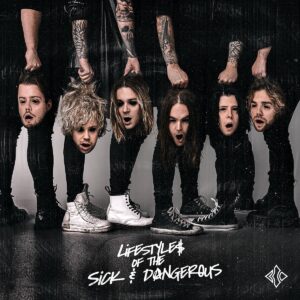 That darkness which envelopes Finland is what fuels BLIND CHANNEL. The veritable coal to their roaring furnace of ambition, embracing it is the DNA that runs throughout their music. Balancing their tenacity with sincerity, “It’s this feeling of never being enough is what drives us forward right now,” vocalist Niko Vilhem says. “We got our huge breakthrough, but it’s been also a scary time, like all this has been probably the scariest year in our lives.”

“It took me eight years to become an overnight success”, this line, buried away in BLIND CHANNEL’s fourth album Lifestyles Of The Sick & Dangerous is where their uncompromising journey finds its continuation. When forming back in 2013 in the city of Oulu, way up in the North of Finland, vocalists Niko and Joel Hokka, drummer Tommi Lalli, guitarist Joonas Porko and bass player Olli Matela, plus the later addition of keyboardist Alex Mattson – knew that it was all about going big or going home.

One month before the release, Allkinds had a chat with Joel Hokka (vocal) & Joonas Porko (guitar).

‘Douze points’ for the new album from the Belgian jury! What are you guys doing right now?

“Just busy with some promo stuff for the new album in Berlin and having a good time!”

Bring us back to the big bang of Blind Channel.

“We were in high school and had the idea of a band that could be succesfull outside Finland.  A dream in 2013 that we could conquer the whole world with a new kind of rock music.  Several bands broke up at that time and we realized that we could stick together and start a new band.”

Do you remember the feeling to bring out the first single/demo?

“A pretty cool feeling to release a song by a record label, first we started with demo’s.  The first demo we put out, was already played by the big Finnisch radio stations as ‘Demo band of the week’. That was the moment that I realized this could be something succesfull, if we work hard. And we still have some work to do, for sure.” 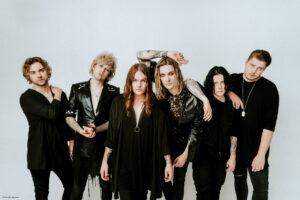 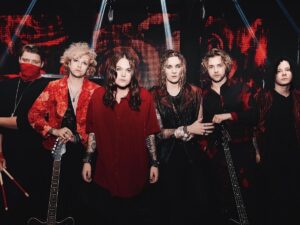 Did the demo had a title?

How do you see the evolution of the music from the first album Revolutions till now?

“It’s been a long journey for almost 10 years.  We’ve seen whole Europe, a lot of America.  Also we’ve grown up together, we were teenagers when we started.  It’s been an incredible journey in musical way and in our lives as well.

When we listen to the first album, we are proud but you can hear that we were much much younger!  Or brave, you know!

The third album is a very good album, with super heavy songs and with this upcoming album I think we have found out our style. Blind Channel sounds now like 2022!”.

Tell us about the album title  ‘Lifestyles Of The Sick & Dangerous’, when I hear the title I first think about hospitals  (The Sick) & jails (Dangerous).

“It’s a lyric from the song ‘Dark Side’, the first single of the album.  It describes our lives right now.  We are touring all the time.  We are drinking & partying very hard right now and in our personal lives we can be a little broke, with hard feelings inside.  Lifestyles Of The Sick & Dangerous is a perfect definion to what we are doing.

How goes the writing process of the songs?

“We started with brainstorm ideas.  It was a total chaos in a room!  We all like a different style of music: Joel (metal), Joonas(metal), Niko( hip hop/pop), Alex (EDM DJ’s). We have everything, like a salad.  And at the end of the day, it still sounds like Blind Channel.” 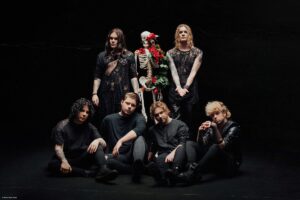 Is the objective  always to bring a message or an opinion?  You sing it in the first song Opinions: ‘I wanna hear opinions’ “.

“Opinions is our answer to people who wanna tell us opinions, they wanna tell us how you should do this.  We don’t give a fuck about your opinion!  We do this almost 10 years and we know exactly how to do this and we don’t need a random person’s opinion!

In the whole album, lyrics are very important to us.  We don’t like to write songs where lyrics don’t mean anything.  Sometimes it could be working but it is not our style.”

About the ‘Bad Idea’ video,  was there first another idea for the video, because there was a reshoot.

“The first idea for the video was more in a cinematic Hollywood style.   But at the end of the day we thought about a more simple idea for the video.  So we decided to do another one.  We wanted to have something super simple that describes the whole song.  ‘Baby I have a bad idea, you should not be around me and you should stay away from me’.

The first video is also released but was to complicated.  To much stuff going on.”

“ ‘Glory for the Greedy’ is about music industry.  With the first three albums the labels said: ‘You should change the language in Finnish and you are not gonna conquer the world with rock music with electronic guitars’.  The funny thing is now, we broke through and now they say ‘ remember, we always believed in you!?’ And now we have something like ‘Fuck!’  It’s just funny when you read the old and the new messages of these guys.  It was just inspiring!”

The last lyrics of ‘Thank you for the pain’ are in the Finnish language.

“It’s our first interview from 2014 for local media.  We were super excited about the new band and we wanna capture that emotion on the end of the album with a sample of the interview.  It’s really nice because you can hear that we are pretty young, little racoons!  It’s really beautiful.  I guess fans from outside Finland, they have to do some work to find out what we are saying.  I guess some Finnish fans will translate the whole thing.”

“It’s inspired by the Rocky character Balboa.  We wanted to have a soundtrack to ourselves and to everyone who is struggling to make their dream come true,  if they face some challenges. It’s a powerful song, an aggressive one.”

How was the US live tour?

“It was our first time in the USA.  We played 35 shows.  We started from the East North, and then we went all the way from Colorado to Seattle, California, Arizona, Tennessee. The whole fucking country!  It was like living in a fantasy, we saw legendary venues.  We played our first headline show in New York.  Many hours before the show, there were already many people on the line, waiting for the show.  We thought, what the hell is happening?!  Are we a real thing in the USA already?”

The video ‘Don’t fix me’ is a compilation of the tour.

“We wanted just have  a pure authentic honest video.  What is going on on a tour?  We filmed most of the stuff by ourselves.

The lyrics are dark & emo, depressing as well but the song itselves sounds like uplifting and the tour video around that is a perfect compilation.”

How were the backstages venues?

“There wasn’t a backstage in many venues.  We were basically hanging out in our tour bus until the showtime.  It was a good tour bus, so we could chill out there.  It was also a good tour, there was nothing to complain about it.”

Joel, and no voice problems when tired or a little sick?

“These are legends! Respect for all of them. But now our musical taste has changed a bit: Metallica!”

See you guys  in September in Antwerp!

With the year ahead filled with tour dates – including Slipknot’s inaugural Knotfest Finland – the road looks to be heading direct to the promise land BLIND CHANNEL have always envisioned. No longer a mirage, it’s here, and they’ll make sure as hell it’s to stay.