Interview  with T’Pau on W-festival Ostend

The sympathetic smiley singer Carol  Decker from T’Pau was ready for an interview with Allkinds after a brilliant gig on W-festival in Ostend. (25th of August)  Meanwhile she enjoyed a well deserved glass of bubbles. 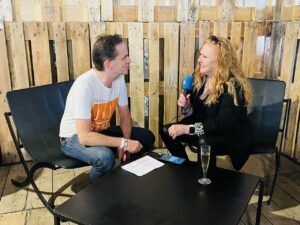 Carol had several hits in the 80’s: ‘Heart and Soul’, ‘Valentine’ and the very well known ‘China in Your Hand’, her biggest UK hit. It also reached the number 1 in several other European countries, also in Belgium.

Just saw your gig  30 minutes ago, what a voice!

“When you get older, you get more insecure about your voice, but God bless! I look after myself and I think I’m lucky as well.”

“No, I’m not interested any more. The publisher once said ‘you really gonna give many of yourself’.  I found it painful to talk about family events and personal things and about what went wrong with the band.  So many years later, resurrecting bad things. I don’t think I will do it again.”

How was the Belgian audience today?

“It was fabulous, opening the day is not so easy, but people were coming in and they were all coming towards the stage, wonderful!”

How did you experience the 80’s during the amazing succes of the band?

“It was wonderful, we were young and were in a succesfull band all over the world, touring with Bryan Adams.  Everybody tells you: ‘you’re amazing!  Great restaurants tables, get some flights,….”

Is there still a hunger to make new music? Today we heard more recent work, ‘Read My Mind’.

“We have a new one out ‘Be Wonderful’, which you can see on Youtube.  We do put out new stuff, but I am completely honest, it’s a little frustrating, you can’t get the radio stations get interested in our new stuff.  But I’ve had a great career already and I’m lucky.  We are going to finish a new song next week.”

Where do you live now in the UK?

“I live in Oxfordshire. I’m from Liverpool and lived in Shropshire and London when I was young .”

It was a real hot summer in Europe, how was summer for you?

“A month ago, it was 41 degrees where I lived, too much for me.  But 4 days later, we had luckily rain in England.”

Memories about Belgium in the 80’s?

“I can remember our song was number 1 here, which was great.  And we definitely did festivals here and also W-festival in 2017.  I just love Europe: the food, the café, lifestyle, the streetlife.”

And now, after the gig, are you leaving or staying to see some bands?

“Unfortunately we have to leave at 5 pm, because we have 2 more festivals in the UK tomorrow and sunday: Darley Park in Derby and in Sandringham Estate, which is one of the Queen’s Estates. So maybe the Queen will be in the audience!”(laughs)

If you had the choice between to stay in a hotel or in a caravan on a camping, what do you prefer?

“Fucking hotel! Pools, cocktails! My husband on the other hand goes to the mountains and camps, he was in the army.”