Portsmouth has numerous sites linked to D-Day. It was the operational headquarters and a pivotal embarkation point. It was also the place for the only museum in the U.K. dedicated to the Allied invasion. Originally named “ D-Day Museum & the Overlord Embroidery it was opened in 1984. Following a µ 5 million transformation with a lengthy refurbishment it re-opened in March 2018. The museum was rebranded The D-Day Story with a new logo and colour scheme.

Using objects , video and interactive displays it is now full of personal stories behind the epic day. We get an insight in the lives of those who took part in D-Day , whether they were individuals on the shore and in the town of Portsmouth or those who went over.

The story is told in three parts, Preparation , D-Day and the Battle of Normandy , Legacy and the Overlord Embroidery. 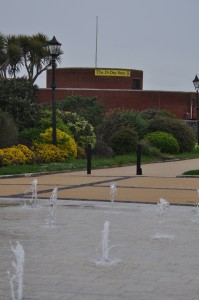 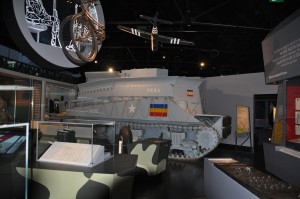 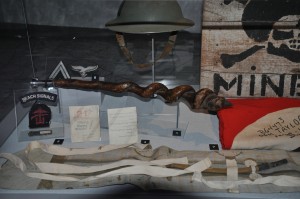 Preparation : discover more about “ The Plan”. Gathering enough information was vital for the success. It took the Allies a long time to decide where to invade Europe. There were secret undercover operations n sometimes together with the French resistance. And from 1942 there was a BBC appeal to send as many pre war holiday snaps. So with the gratitude of the British people more than 10 million were collected. The decision went for Normandy with its wide and shallow beaches and long enough for a front. Beach landings have never be done on this scale before . The plan involved ships , vehicles , landing crafts , aircraft and more than 150.000 men. Men who have served for years have to learn new skills ,new tanks to drive and thousand of others are getting ready to fight for the first time. Read about the training and dress rehearsal for the troops and about the people of the South East who woke up to find the streets filled with trucks and men. All those men needed food and a lot of imagination has to be done by the local people.

For D-Day to succeed specially designed equipment was needed. You can see in the museum a BARV Sherman vehicle ( Beach Armoured Recovery Vehicle ) used on the beaches to clear away broken down vehicles. ( about 60 were built) . Also watch a Mulberry being built , as it was town across the Channel in pieces to make an artificial harbour. The needed material and people with imagination to make things work.

D-Day and the Battle of Normandy: Two spectacular audio-visual displays capture the scale of D-Day and the experience of the troops of the five D-Day beaches. One is projected onto an original landing craft and gives a real insight into the conditions approaching the Normandy beaches.

The display shows an extraordinary array of objects from the day itself. Harry Backinsell landed on Gold Beach and thought he had landed on a mine. Luckily it was just a saucepan , which he then used for the rest of the war to heat water for shaving. Look at the original “ Knobkerrie” used by Beachmaster Colin Maud on Juno Beach. It was his tool as he organised the troops and equipment as they came ashore. His stick was later used in the 1962 film The Longest Day. See als objects from frontline medics and chaplains. D- Day was only the beginning. The battle in Normandy continued for nearly three months. Intense fighting caused widespread destruction. Liberation and destruction in Normandy tells the life and misery of the local population .

Legacy and the Overlord Embroidery: Film clips of veterans talking about their experience give visitors further insight into what took place. D-Day and the battle changed the lives of those who took part and those who lost loved ones in the fighting. What does it means to be a veteran ? How do we commemorate the campaign and remember those who died ? Demobilisation , families who had been separated had to get to know each other again. Many children barely knew their fathers. Everyone was changed by their experiences., whether they had spent the war at home or far away. Look f.e. at the demob suit. Many men complained that their demob suits made them look like gangsters!

We end with the spectacular Overlord Embroidery. This needlework was commissioned in 1968 by Lord Dulverton. He was inspired by the Bayeux Tapestry. Overlord was the code name for the Allied plans to land in Normandy. The embroidery was designed by Sandra Lawrence. It took five years to finish. The work was done by 25 women from the Royal School of Needlework. The total length is 83 metres. There are 34 different panels. It tells the story of Overlord from its origins in the dark days of 1940 to victory in Normandy in 1944. Before finding a permanent home in Portsmouth it travelled more than 12.000 km , mostly in America on tour. Panel 17 is a rather special one. Here some years ago details were removed and redone to getting the story right! In 1944 Piper Bill Millin was the personal piper for Lord Lovat , commander of the 1st. Special Service ( Commando) Brigade. Lovat was the man who made the legendary contact with Major Howard at Pegasus Bridge. When panel 17 was first completed , Bill Millin was shown wearing a helmet .When he saw it during a visit he protested that this was a mistake. All Lovat’s men wore green berets ! The embroidered head was therefore sent back to the Royal School of Needlework where the helmet was duly replaced by the commando beret. 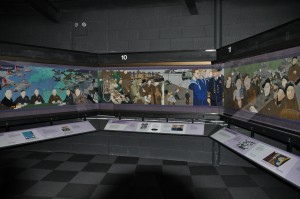 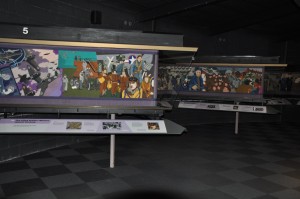 The museum is situated in the Southsea part of Portsmouth , Clarence Esplanade PO5 3NT , not far away from another gem Southsea Castle. Plenty of parking space but it is by pay meter. You will find also a cosy tea room and well stocked souvenirs shop.

Reaching Portsmouth easy via M20 and M25 , Dover connections with either Calais or Dunkirk with DFDS , all info at: www.dfds.com