The Gala Event “A Tribute to Postojna Cave”

On Thursday, 16 November, Postojnska jama, the company that manages Postojna Cave, held a gala event to pay tribute to the cave’s splendours on the occasion of the 200th anniversary of the discovery of its inner parts.

During the event, the cave shone in all its glory and was celebrated by some of the most distinguished artists, researchers and scientists. A special tribute to Postojna Cave was paid by the Slovenian writer Drago Jančar and his lyrical text, which presented the cave and the two hundred years since the cave’s discovery in a very intimate and exquisite way, thus touching deeply every single person present at the event. 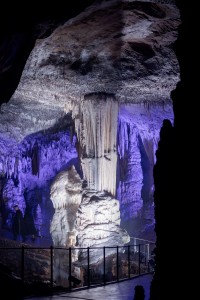 The honorary patron of the gala event was the President of the Republic of Slovenia, Borut Pahor. The highlight of the programme was a performance by Matteo Bocelli, who wowed the audience in Postojna Cave’s Concert Hall, deep under the surface, with the world-famous Caruso.

“I am honored to be able to perform in the magnificent setting of Postojna Cave, which you cannot help but fall in love with,” said the rising star Matteo Bocelli, who topped the world charts in early autumn with a duet sang with his more famous father, Andrea Bocelli. On Thursday, he concluded his solo performance with the song Can’t Help Falling in Love sang together with the Slovenian opera singer Nuška Drašček. The famous six-second echo produced in the cave during singing presents a considerable challenge even for the best singers. It makes for challenging singing, however, the effect is magical and magnificent. Matteo Bocelli came to Slovenia at a special invitation of the Postojna Cave management, which aims to maintain the tradition of performances by the most distinguished international artists. Ninety years ago, this tradition was started by the world-famous conductor of Teatro alla Scala from Milan, Pietro Mascagni.

On our question – how does he feel before performing about 100 m under the surface – Matteo Bocelli answered: “I’m so excited and honored to be performing in Postojna for the President and many other important people.  I’ll be a little bit nervous, also because it’s going to be my first performance in Slovenia, a country that I respect and admire, but is part of the game.”

In his keynote speech, the President of the Republic of Slovenia, Borut Pahor, compared Postojna Cave with the mysteriousness saved for those who are interested in the magic of nature. He concluded his speech with a famous quote from Antoine de Saint-Exupéry: “What is essential is invisible to the eye!”

Marjan Batagelj, the General Manager of Postojnska jama, the company that manages Postojna Cave, presented a different view of the largest and to-him the most beautiful show cave in Europe. “Over the last two hundred years, Postojna Cave has been part of five different countries, from Austria and Austria-Hungary, Italy, for a brief period Germany, Yugoslavia and finally Slovenia. It lived through various forms of government and political systems. The countries may have changed, but what mattered most when it came to the cave was how well its respective managers took care of it. The mission of all of us who are taking care of the cave today is to do so sustainably. Our aim is to leave the cave to the future generations in a better state than the cave was in when we took it over.” When describing what it is like to take care of Postojna Cave, he used the expression the Sword of Damocles, pointing out that as a cave manager he is at all times keenly aware of the ever-present responsibility. After all, he is reminded of it every time he visits the cave by a Sword of Damocles-shaped sculpture, which was on Thursday brightly illuminated for the first time in the cave’s 200-year history.