For those who have not visited battlefield areas before , it can be hard to know where to start.  The Somme battlefields are within a 90 minutes drive from the port of Calais , the main terminal for the P&O ferries with 23 crossings a day.   Info : www.poferries.com  The Somme area was deeply affected by The First World War. Landscapes, towns and villages were torn apart by the fighting. From 1914 vicious battles took place at the Somme , mostly between French and German forces. In 1916  the Allies launched a major offensive , the most cruel battle of all. The principal landmark is the Thiepval Memorial.  It is the largest Commonwealth war memorial in the world. It commemorates more than 72,000 who died in the Somme sector who have no known grave. The memorial was designed by Sir Edwin Luytens, one of the 3 main architects employed by the War graves Commission. Next to the Memorial is a cemetery with an  equal number of Commonweath and French graves.
The modern glass fronted interpretation centre is free of charge. It gives a short insight of the importance of Thiepval , has a bookshop and toilets.  Built into the visitor centre is the new Thiepval Museum. It was inaugurated this year on the 2nd of June. It uses modern and innovative displays. A 60 metre long lit glass mural opens an  imaginary window onto the 1st.  of July battlefield . Also the role of Aviation in the Somme battle is shown. The museum is managed by the Historial of Peronne. There is an admission fee for the museum . You can purchase a combined ticket for The Historial of and The Thiepval Museum.Peronne.   Info:  www.historial.org
Bapaume , Albert and Arras are good bases to explore the area. You can combine Thiepval with other monuments in the Somme or you can go a little bit further north as we did and trace the importance of the battle of Loos ( 1915). Loos  and Artois sometimes remembered as the forgotten front.
Compared to the Thiepval area  the traffic around Loos is busier. The large city of Lens is not far away. First look for the Loos Memorial on a crest at the right when coming from Loos  ( N43 or D943).The Memorial is incorporated in the Dud Corner CWGC cemetery. The walls of the cemetery which form the Memorial show the names of almost 21,000 men with no known grave.  They fell in the battle of Loos and surrounding areas.  A viewing platform offers a remarkable panorama over the battlefield. Leave the main road at Mazingarbe and turn left for the D39 towards Hulluch. It is much quieter to drive here and soon you will reach St. Mary’s ADS CWGC cemetery , the first of 3 you can visit.  The  ADS = advanced dressing station and was set up during the battle.  Of the more than 1700 burials 90% are unknown. One of them , reburied here in September 1919 , was a lieutenant of the Irish Guards. In July 1992 the headstone marking his grave was changed into Lt. John Kipling. The CWGC identified the body on  the ground of  Kipling being the only full lieutenant in the Irish Guards killed or missed in the Loos battle.  His father, the famous writer Rudyard Kipling spared no efforts to find his son’s body , but it was in vain .
Go to the back wall of the cemetery . Across the battlefield you can see the other two cemeteries and the large Double Crassier , the twin large spoil heaps which dominate this flat mining area. To reach the 2 other cemeteries continue till the next turning with CWGC signs. Follow the immaculate grass path leading to the” Ninth Avenue CWGC cemetery”. This tiny cemetery has only 46 headstones, 41 are of the 1st. Cameron Highlanders. It is surrounded by a beautiful flint stone wall.  The next grassy path leads to Bois Carré CWGC cemetery with about 200 graves. The name means square wood and the cemetery is actually square.
Especially with good weather you can enjoy a full day of battlefield history. 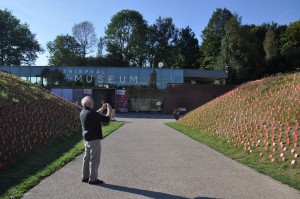 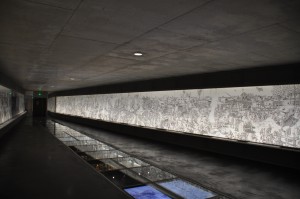 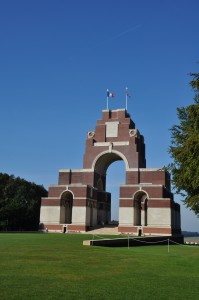 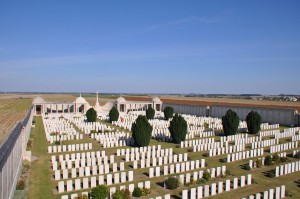 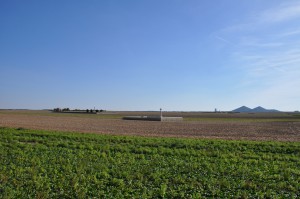 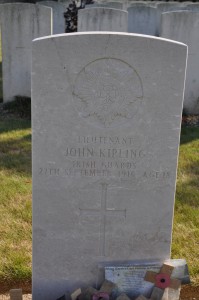